Chances are, you've heard Julia Michaels' music whether you know it or not.

The songs she's written for other artists, including Justin Bieber's Sorry, Ed Sheeran's Dive and Selena Gomez's Hands To Myself, have clocked up more than 8 billion streams worldwide.

They're all songs that feel deeply personal - even when the artist doesn't get a writing credit. And that's Julia's secret: She persuades pop stars to open up and spill their guts like a packet of Cornflakes.

For years, she was content working behind the scenes, until she wrote a song she just couldn't give away.

Issues, released in January, is as catchy as it is tender - with Michaels rejecting pop's prevailing narrative of the strong, independent woman to admit her vulnerabilities. 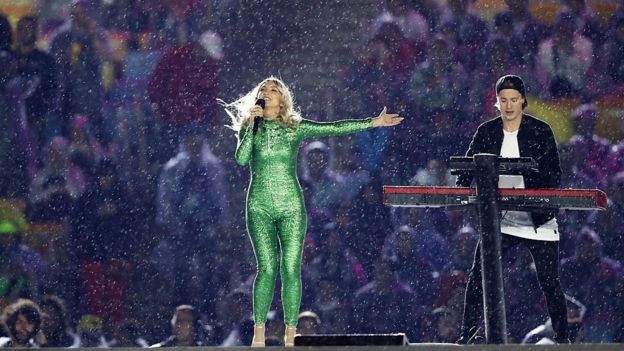 "I'm content with saying I have jealousy problems," the 23-year-old tells the BBC. "I'm emotional. Sometimes I cry, just because - and I don't think anybody should have to hide that side of themselves.

"If people aren't going to be accepting of that, they don't deserve to be around you."

Michaels has found plenty of people who've accepted it. Issues has been viewed on YouTube more than 134 million times, and her next single, Uh Huh, is already catching up.

"It's insane," she marvels. "I never expected that."

The day after her debut UK performance - at last month's Capital Summertime Ball - the Iowa-born singer chatted to the BBC about going solo; her lonely childhood; and having "eureka moments" in the studio.

Your real name is Julia Cavassos - why choose Julia Michaels as a stage name?

My dad is Puerto Rican and when he moved to LA to be an actor, he was advised to change his last name to something more American, so he could go up for roles that were Italian, for example - because a lot of times they see the names before they see the photos.

So of course he picked the most American name he could find: My dad was born Juan Manuel Cavassos and he changed it to John Michaels.

When I was a kid, my mom tried to get me to act, too, so we just took my dad's stage name and I've had it ever since.

Did you get any parts?

No, that was definitely not on my cards. Writing was the thing I always wanted to do. 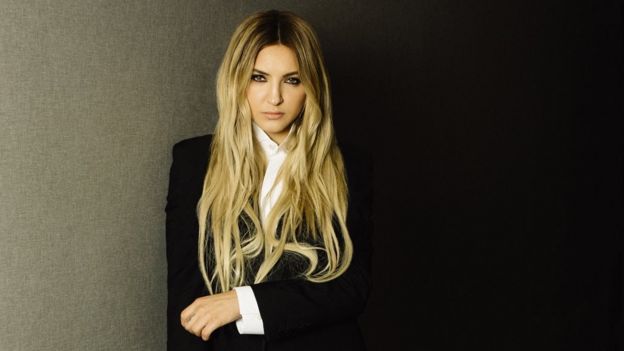 When did you realise you were good at writing?

I've written for as long as I can remember but I guess it was when I won a poetry contest in fourth grade.

What was the poem?

I think it was something about love - and of course when you're in fourth grade you have no idea what that means.

But I've always loved words. Growing up, it was my way of feeling less alone.

Why did you feel that?

My parents divorced when I was quite young and I wasn't super close to my siblings and I was kind of an awkward kid. So I always felt like words were kind of my best friend. That was my way of getting my emotions out.

Were you an avid reader?

No, it's funny. I've never been much of a reader. I can read poetry but I can't read books. I don't know if it's my attention span, or if it's because I equate it to songwriting. When you write songs, you have to create an impression in three minutes; and that impression has to be fun or heartbreaking or something super messed up.

It's the same with poetry. You have, like, 15 lines and there's your sentiment. Boom, it just hits you.

So you're not reading Beowulf, then? 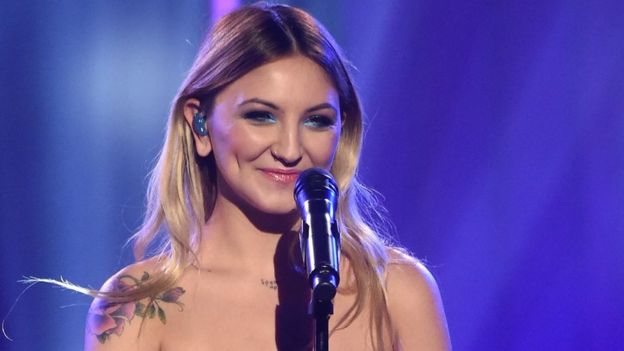 Image copyright Getty Images Image caption The singer says she has a "ready-made" fanbase, after Justin Bieber and Selena Gomez fans sought her out on social media

When you're writing a lyric, how much editing and redrafting do you do?

I kind of self-edit as I go. I'm not the kind of person to write a song then revisit it a week later. Usually, if it doesn't feel right we fix it in the moment.

There's a line in the Selena Gomez song Hands To Myself that's been called one of the best pop lyrics of recent times - but she told me you improvised it. Is that true?

I tend to do a lot of things spontaneously, just singing into the mic. So I was doing the bridge - "can't keep my hands to myself" - and when we stopped, I said, "wait, guys, I have an idea. It could be really dumb but let's roll with it".

And then I just sang, "I mean I could - but why would I want to" and they just went, "Ooooooh!"

Sometimes it just pops into your head. Like a little light bulb going off.

You said "this might be dumb" - but I guess it's important to be vulnerable in the studio...

Shelly Peiken, who's a really incredible songwriter, used to say "dare to suck". You never know what people's reactions are going to be, so you've got to take chances. 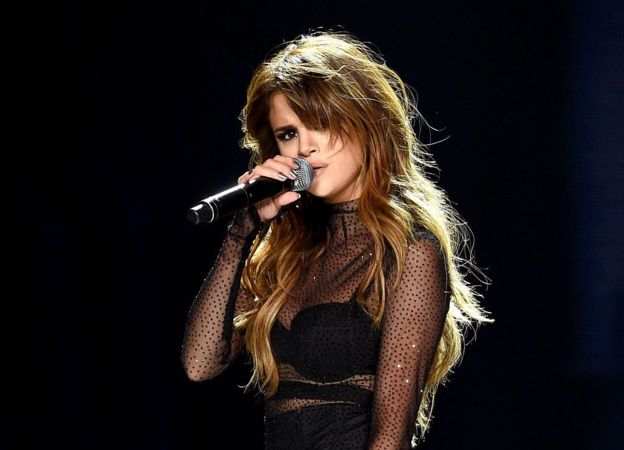 What made you want to step into the limelight and sing your own songs?

It was when I wrote Issues. I'd always written personal songs, but this one was very, very personal.

I'd had a fight with my boyfriend - who's my ex-boyfriend now, we broke up last week. Anyway, we'd gotten in a stupid fight and I wrote the song that day, and there were a couple of artists that really wanted to sing it. But because I'd written about me and him so specifically, in that relationship, I just felt uncomfortable having somebody else sing something so personal.

So that was the point where I emailed Charlie Walk (head of Republic Records) and said, "I think I'm ready to do this".

So people had been asking before?

Was it hard to move from singing backing vocals to being the lead?

No. I've sung every template vocal of every song I've written, so I'm used to performing it the way the artist would sing it. So that's never been a problem for me.

Issues is about having strength in vulnerability. Why did you choose that message for your first single?

I feel like nowadays, women feel like they have to suppress their emotions because they don't want to be the stereotype "emotional girl". There's nothing more annoying than a guy saying, "You're too sensitive". I hate that.

Not everybody is unicorns and rainbows all the time. And if people can't stick around for the hardship then, no, they don't deserve to be around you.

But the song's not just for women. Men suppress their emotions all the time and it's really sad because there's so much power in being OK with who you are. 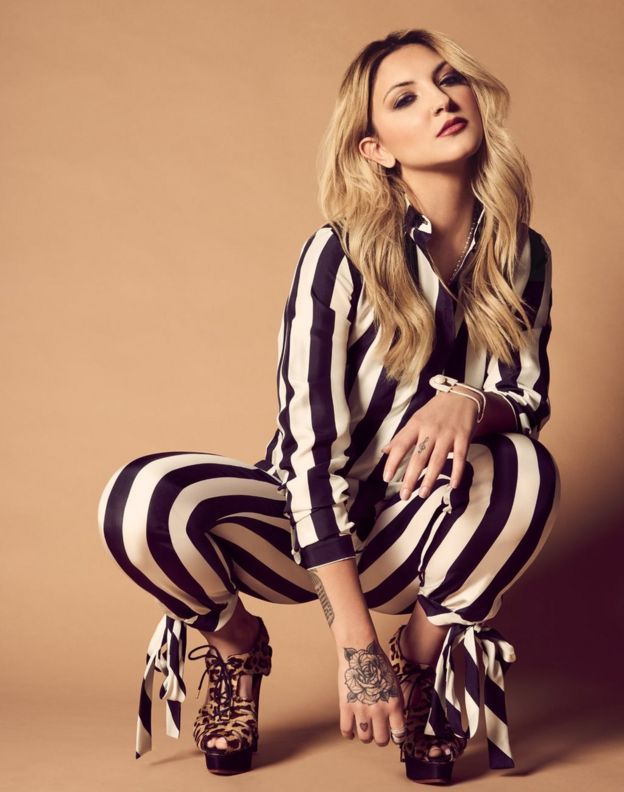 Uh-Huh is perhaps more straightforward, in that it's about fancying the pants off someone.

Definitely. That song came from an experience I had with somebody, where I really wanted him to make the move. Like, desperate for it. And we were both so nervous.

So what happened with this guy? Did one of you make the move?

You've got to ask him out, now that you've confessed everything in a song!

You're about to release your first EP. What can we expect?

Well, I tend to only know two sides of myself at this moment, as a 23-year-old woman. I know my emotional side, and I know my playful, more sexual side. And because I know those things, those are the things I tend to write about.

So a lot of it is going to be touching on those situations and, in lieu of recent events, there will be a lot of heartbreak situations.

So you're replacing some of the songs right now?

Yes. There is no silver lining to a breakup but the writing.

But wait - doesn't that mean you can ask the other guy out now?